Written by Sister Maria Cana, Argentinean religious sister who, together with three companions, works in the centre for rehabilitation of lepers in Sishan, Minguan, Province of Anhui.

In March of 2010 we celebrated the third anniversary of our arrival, three years in which by pure grace, Jesus could be served in the persons of these patients. 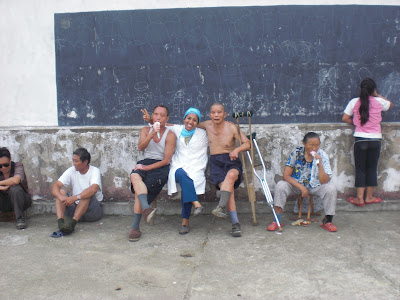 In our center life around 40 patients that suffered of are suffering from leper and all its consequences. Some can no longer walk, others became blind, others suffered injuries, wounds in their hands and feet; and so we are helping and assisting in all we can and in the measure they allow us to. We take care of their wounds, wash and mend their clothes, clean their little rooms. For ourselves, besides giving material assistance we also try to give them joy and love. They themselves told us our God must be good because if we that are His daughters are good, He must be good too. In this way they slowly get to know God, His love and His providence for each of His creatures through our activity and gestures. On Sundays and feast days we prepare special activities like games, singing and even some sport. Who could imagine that someone in a wheelchair, that has lost all the fingers of his hands and is already more than 80 years old, would wait so enthusiastically the arrival of the next Sunday so that he can play ball!
Life in a leprosy center is not easy at all. When someone has been excluded from society, separated from his or her family, compelled to live alone and without any support, life seems not to have the same value anymore. The patients that we assist say that, before we arrived, every year 2 our 3 would die, and in most cases it was suicide. Finding themselves in this state of abandonment, with no help and unable to help themselves, humiliated for such a long time, they decide to end their own life. When we arrived one of them had already decided to do it soon. He himself told us that, having lost his legs, and suffering what he believed where incurable wounds for more than 20 years, he thought he would not have much more time of life and so decided to end it. These are his words: “The sisters arrived just in time. They healed my wounds and here I am!” 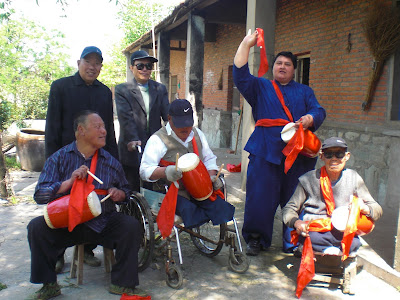 These few years we have spent among them we have accompanied the dying trying to relief their sufferings if when can. The first one was an old lady that, already without the two legs and blind, could not help herself. Still, for us, it was unbelievable to see how much she could still do by herself. During her agony, that lasted for a week, we tried to help her in all we could, in spite of the contrary opinions of the other patients. This dedication impressed them and help, little by little, to change their way of thinking.
Before our arrival no one would assist these dying people… simply because the others had no way to do it. Taking care of someone in a final state requires great energy and, of course, you need the ten fingers in your hands and to be able to move without crutches or wheelchair.
One day one of the sisters heard a strange conversation: “When I reach that state”, said one of the patients, “I don’t want them to take care of me.” To this, another one said: “I want, they came from so far… I do want them to assist me in that moment”. Others were of the same opinion.
We understood that, because of the long time of solitude, the abandonment and all sort of needs made them gradually lose the conscience of their own dignity. And that is why we should, with our words and actions help them understand how valuable and important each human life is, and how much we should care for it. We believe that it is growing in them the certainty that someone will take care of them when they reach their final moments, that they won’t be alone, and this gives them a little bit of hope.
We trust God will bless abundantly what we are doing and, the same way a seed becomes a tree, one day (and even if we won’t see it ourselves), this will give its fruit. Our part is to sow generously.