Written by Francisco, Jesuit scholastic who is doing one year of service and learning in Casa Ricci. 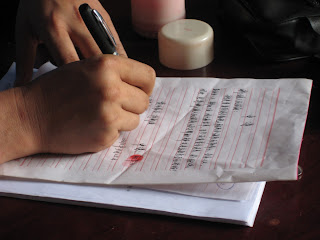 One of these days the Gospel at mass presented to us a strange situation: Jesus enters Capernaum with His disciples, the Pharisees and the Doctors of the Law are also present and, to everyone’s surprise, a roman officer comes and asks Jesus to cure his servant. (Luke 7, 1 – 10) While listening to the reading, my attention was drawn to the moment in which the Pharisees themselves ask Jesus to do the miracle, arguing that the roman has been good to the Jews. I think that part impressed me because during these last months of work with Casa Ricci I found myself in a similar situation; not because I can do miracles, but because here we work with together with many different people. I have found here that people that are very different from one another and have different cultural, religious and even moral backgrounds can still work together for a common good.
At this moment I am in a village in Yunnan, where I came with a lady that is part of Casa Ricci’s staff. She is developing a project of Micro-credit here. Yunnan is quite famous for its rich ethnic variety with dozens of different minority groups living here, and also for the beauty of its landscapes. In these first two months with Casa Ricci I already traveled twice to Yunnan. I think I will spend much time here because, together with all the beauty, cultural variety and economic growth, there is also a world of misery, leprosy, AIDS, prostitution and all kinds of social problems.
The relationship with the gospel that I was talking about is in the group of people that are here with me in this room. Besides me, there is the lady, whose name is Cecilia and who is a Taiwanese Catholic, there are two local government officials, there is the primary school teacher, some village women with their husbands and also some people that received help in the past.
We know that during his lifetime Jesus made many miracles. We also know that sometimes he chose not to do them. I believe one of the reasons, or even one of the conditions for a miracle to happen is that, even with all the differences among ourselves, there is a union of hearts in the desire to do good things. That’s it, union of hearts for a greater good and service of those that are in need. Cecilia is for them a real miracle, and I think it would be almost impossible for this miracle to arrive here without this union of hearts. It were the government officials that brought us here in their jeep (I guess these places can only be reached by jeep!), it was the professor that gathered the people for our coming, it were the women that helped to choose the families that most needed help… and it was Cecilia that brought the money from Casa Ricci.
But money is only part of the miracle. She doesn’t give it away just like that. She knows many by their name, she asks each one how they have used the money, she gives advice and encouragement to those that feel confused or lost, and she promotes help and collaboration among themselves. An example that impressed me was of a man that suffers from AIDS, has no job and must take care of his two daughters by himself because the wife left him. They live in a cottage of bamboo… Cecilia understood the situation (even I understood it in spite of my poor Chinese) and, instead of just giving money, she helped the people to become sensible to that situation. One hour later one of the leaders had already written an official request for help (that hopefully will get half of the money needed to build a house), and the rest of the people already wanted to offer some construction materials and even help in building the house. This way you reduce the costs and form a chain of solidarity. Cecilia gives the rest.
I think we all know what microcredit is. It’s a simple concept: lend money to the poor so that they can rebuild their lives and start to do some work. When they could already make some money, they keep some of it for themselves and start to return the borrowed amount, without interest. As far I can understand it really works! Many of the people that I met today and that offered help to the father of the two little girls were helped by Casa Ricci in the past. Most of them do not have many possibilities, so the activity they chose to start is to raise pigs. With a little money they buy a little pig, raise it and then sell it and use the money to feed their families, pay some studies for the children and save for medical expenses. It was beautiful to see the people coming and “signing” the contract by making a sign with the finger in ink.
Because these places are all so far away, I have a lot of time to think while I am on the way. Today I felt amazed to see that people so different from me, people that do not have the same religious values that I have, can, nevertheless put the Gospel into practice. What if our own communities where a bit more like this? Sometimes it is not enough to wait for the “official help” to come from the sky. We need to overcome our differences and give a little more of ourselves.
September 2010