Written by Cecilia who, in Casa Ricci, is responsible for the programs of rehabilitation for HIV affected persons.
In mid-May, Fr. Fernando and I headed out for a 4-week long journey to Mainland. For more than a year we had been searching for an opportunity to lend our services to people with AIDS. We had rejected an earlier proposal by a local official to assist in a project when we discovered that he was only interested in the financial aspect but not the actual service of the people.
At our third stop, we visited an AIDS organization run by a man named Edward. What we found was something beyond our expectations. Edward gave us an overview of his organization’s operation which provides shelter for AIDS patients and advises their families. One of his best practices is to hire HIV carriers to work for him by providing counseling services inside the hospital. We exchanged experiences with Edward, briefing him on our leper projects, outreach programs, scholarship programs, and the AIDS work. Edward lamented that his organization has so many needs.  After a few discussions, we began to think about the possibility of collaboration. 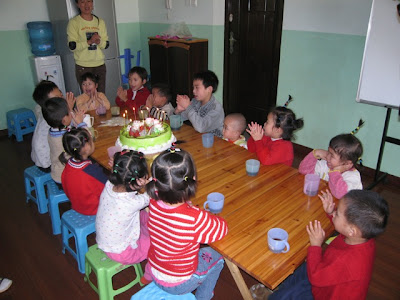 In the afternoon, we visited one of his shelters for AIDS patients. Edward told us that once a hospital brought an orphan over to them because no one wanted to adopt him, not even his grandparents! His center serves adult AIDS patients only, and they are not set up to care for children. But Edward didn’t have the heart to turn the orphan down because he had no place to go. So the child stayed. Then one thing led to another and within two short months they had five HIV children. This has made the living conditions much worse and now they are very crowded. Edward is in desperate need of funds because if budget does not allow him to relocate the children.
We spoke to Edward about our HIV orphanage plan. After listening to us Edward said, “Do you think you can give us a Sister to care for the children?” At that moment my heart started singing, although my ears could hardly believe what I was hearing. “What?!” I said. He repeated that they needed a good caretaker for the children. I responded with joy that we would be happy to try to send him not only one Sister but two! When we least expect it HE opens the door for us!
After a month, I located five congregations and talked with each local superior to brief them on the HIV orphan project and idea of inviting the Sisters. Surprisingly, they all expressed a desire to work with us, and asked what qualifications the Sisters would need to have. Afterwards I drafted the following response and sent it to them.
We are not asking for the sister to have knowledge of AIDS care,
But we would like her to have patience and compassion;
We do not require her to have medical expertise,
But, we would like her to be responsible;
Neither do we demand administrative talents,
But we would like her to be able to live her faith with joy.
During the period of service, the sisters will learn from the children, and we will provide a training opportunity. We believe the technical skills can be learned, but the motivation of service has to be there from the beginning.
If HE can plant a seed to nurture, it will grow and bloom. We believe we can provide parental love to the children, and help them reclaim the lost affection; regain their confidence, sense of virtue and the desire to study.
Since then, the music has not stopped, and I cannot stop singing!
As of now, we are setting up our fourth HIV orphanage.
Cecilia
發佈者： Casa Ricci 於 上午10:31