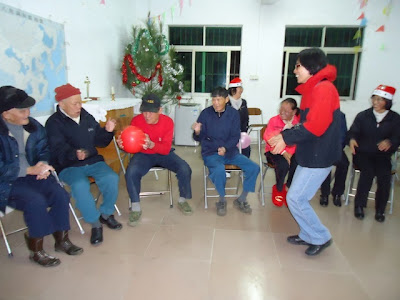 This past Christmas, I chose to go with Ricci Social Services staff (Fr. Howard Lui S.J., staff Teresa Chou, and the driver “Siu Kwan”) to Huizhou, Guangdong to visit the rehab people in the Bailu Leprosarium there.

This is one of Fr. Luis Ruiz’s most concerned communities in his lifetime. At the same time, this was the first time I personally involved after I got to know the services of Fr. Ruiz in his later years. Leprosy-affected people are a community that I never touch before and I can take this opportunity to understand them.

The date of visit was December 24 and 25. Activities included Mass celebration, sharing dinner, and group games.

In the preparation meeting, we come to agreement quickly to implement the planned activities. When talking about the activity expenses, we do not worry too much, as we can adjust according to the funding available, and will not affect our decision of our visit. Of course, we really are thankful to all those who have donated, as we can quickly raised enough money in a very short period of time so that a wealth of activities were possible for these rehab people. These included a delicious Chinese style Christmas meal, a Christmas present and a red pocket for everyone as well as to participate in the game and feel the joy of the lucky draw.

From the start of the driving journey, our staff continued to receive SMS inquiries from the sisters in the leprosarium about the traffic condition and looked forwards to our visit. I learned later on that our visit to the leprosarium is the first time since its establishment that there are people outside to come on Christmas Eve to celebrate Christmas with the rehab people. They feel such a major religious event and are excited at the priest’s special arrival to celebrate Mass for them. In addition to those from Bailu Leprosarium, there was another group of rehab people living 60 kilometers away, as well as more than a dozen Catholic villagers, came specially to participate in the Christmas Eve mass.

The atmosphere of dining with the rehab people at the Christmas dinner was good. They seemed to really enjoy the food and were well fed, with the leftovers packed back to their room so there was no wastage. It was found that they are usually doing their own cooking, with few opportunities to sit in a table to eat together.

Although behind every rehab person has a different story, but they are not unhappy with a straight face in their life. From simple chatting to playing games with them, they are very active and responsive. We introduced Macao's traditional group games ─ “Bingo”, and played with them. Because of incompleteness of their limbs, they cannot play this game with the usual speed, but the level of excitement created through their active participation was the same or even greater. We were glad that they liked this game!

Among the rehab people, the ones that most caught my attention are two young sisters ─ the younger one was less than 20-year-old while her sister was 20-year plus age. The challenges that the One above gave them in fact are true and many: has experienced poverty as well as mom and dad passed away at a young age; was found to be infected with leprosy within a short period of orphanage life, cannot continue their studies and were being sent to Bailu Leprosarium for treatment. Although their conditions were under control after a period of time, but their appearance has been slightly affected. Will they have the confidence to return to community and live independently, or have to stay for rest of their life in the leprosarium? This is my greatest concern. I hope that the staff of Ricci Social Services to help these two sisters to overcome these tests, and hope they can have a great life in the future after experiencing these challenges.

Participating in this event, I can feel Fr. Ruiz’s dictum: "Nothing happier than to make people happy!"