Solidarity requires our Heart and Mind

Moving towards our 30 years Anniversary
(This article was written by Mr. Pedro Leong, a CRSS staff member. He reflects about the many changes that happened in Casa Ricci since Fr. Ruiz arrival at Da Jin Island in 1987)


"Wherever our services are needed, there we shall go!" This is a simple and direct concept of service to others. On 8th October, 1987, Fr. Luis Ruiz received an invitation from the Guangdong Provincial Government to go to a place known as Da Jin Island to provide care for people affected by leprosy (PALs) who had been sent to live there. From that moment onward, time has passed so quickly; we are now approaching our thirtieth year of service on the Chinese Mainland.

Presently, our service activities have extended to nine province in China. Incidences of leprosy have reduced; but we are aware of the need to serve patients of other medical afflictions where they also suffer discrimination and marginalization. So CRSS has expanded its services to help AIDS victims, students encountering financial hardships, residents of economically depressed areas, and victims of the sex trade. 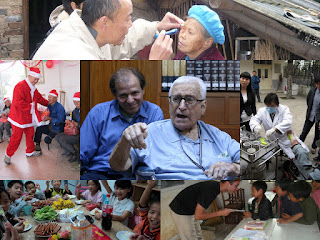 In actual fact, the name of Fr. Ruiz (or rather, Father Luk, in the local Cantonese dialect) was well-known in Macau from the 1950s through the 1980s. There used to be a saying, "Some of the poor in Macau may not know the name of its governor, but none of the poor in Macau would not have known Fr. Luk!" This is because Fr. Ruiz went about his work with a practical approach combined with human warmth. His work became the standard of quality to which all of Macau's service and charitable organizations aspire. He earned the trust of many overseas and local people of goodwill, groups, institutions, and government entities. Upon learning that his name was associated with a particular project, they would willingly join in partnership or in support of that activity. And then there were those who had received his help in the past, they, too, would follow his example and participate in various services to the community.

In 1987, having found a successor for Caritas de Macau, the entity which provides charitable services in Macau, Fr. Ruiz then devoted his time and energy to serve the larger needs in Mainland China. At that time, he brought with him a number of religious sisters from India to work on Da Jin Island. These sisters had previously been working with him in Macau.

As the Bible says, "There are no new things under the sun".  The positive results of the service on DaJin Island led to more requests for help from local governments of other areas. In response to the many requests, Fr. Ruiz contacted a number of Mainland Catholic congregations to volunteer their services for the work. At the same time, CRSS also expanded its activities beyond Da Jin, and gradually began to establish working partnerships with other Mainland organizations.

However, it should to be pointed out that, when CRSS was starting its Mainland China service in 1987, the country was just beginning its drive to reform and to open up to the world. At that time, the government welcomed assistance and resources from abroad. Laws and directives pertaining to foreign entities operating inside China, and regulatory agencies responsible for their supervision, were still in the process of being established. Hence, the application, approval, and on-going administrative processes were simple and straight forward. Under those circumstances, Fr. Ruiz was able to quickly expand his operations. In those days, the major obstacle was the transportation infrastructure; administering the care was not the problem.

With the success of the reforms, China has achieved an enviable economic and political position on the international stage. At the same time however, administrative processes, and laws and regulations, are gradually becoming more codified and complex. One of the unfortunate results is the increasing restrictions being placed on foreign entities operating inside the country. Examples:

Just to take Example #4 - temporary regulations relating to foreign NGOs operating within Yunnan Province - a lot of time and effort were expended to provide the requested details (and those of our partners) required in order just to continue our work in Yunnan, and that has seriously affected our service delivery. As for the anticipated new procedures relating to the supervision of foreign NGOs, we believe the future, requirements and restrictions will be even more severe.

Fr. Fernando Azpiroz, who began working with Fr. Ruiz, in 2005, and who has since assumed responsibility for CRSS, is facing this situation. He is well aware of how these regulations and procedures are affecting our service in Mainland China, as well as the discouraging effect they have on our partner organizations and on the local governments. In order to maintain the necessary relationship of mutual trust, mutual reliance, and seamless co-operation, it is no longer possible to rely upon personal legacy and historical reputation. A long-term strategy will require all stakeholders to share a common mission, a common ideal - to serve others.

In one our meetings in 2013, we defined the spirit of Casa Ricci in the following way:


To find life amidt situations of death
To create hope in the middle of hopelessness
To recreate dignity together with those who have been marginalized
To defeat discrimination, by building solidarity.


Fr. Azpiroz took Fr. Ruiz's words, "Wherever our services are needed, there we shall go"! and raised them to meet our present-day situation and current challenges.

At the same time, we need to increase the efficacy of the work being done by our partner organizations at the various rehabilitation centers. In 2004, Casa Ricci established the first training programme for directors of these centers. At the second training programme in 2015, we set up an electronic platform for the different service groups to exchange information and messages. This is to allow the different partner organizations to share information and their work experiences. At the 2016 budgetary meeting, Fr. Azpiroz took a further step and told the staff of both at Casa Ricci and the partner organizations of the need to make our services more local, to have more structure and better defined objectives to our work, to conform to legal requirements, and to become more proficient in what we do. In truth, the situation is changing, and we must adapt to the changes. We have to strengthen our partners' commitment to the ideal of service. This is the only way we can stand firm and face today's challenges.