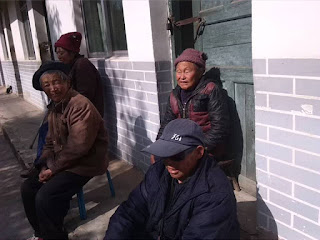 There was an old man with sudden osteoporosis. The pain was very powerful hence the head of the village head quickly hit 120 to call the ambulance. I accompanied her to Dechang County hospital. After a through inspection, then there was a drip injection until the end of nine o’clock. The pain lasts for three days without any sign of reduction, therefore on the night of the third day, I went to see the doctor-in-charge to re-consider the case, the new drug has a curative effect and the pain of the elder is reduced. Finally she can slowly sleep. In the morning after, I bought some food for breakfast. After eating the elder chatted with me about her life: At the age of seven, she studied for half a year before her mother died and the schooling interrupted. At eleven, her sister also died. At twenty-three years old she suffered from leprosy. When her father also infected with leprosy, both of them came to rehabilitation center for people affected by leprosy. Unfortunately, she was later suffered from rheumatoid arthritis, and became almost like a useless person, with pain all over except the eyebrows and the hair. Her father died in 1998. We live without living, and die without dying…such life is so miserable!

I listened with a heavy heart and do not know how to comfort her. But still said to her: there will be result if you have confidence in God and rely on the help of God for a good treatment. And she said, "There used to be a lot of people farming in the land outside. Since coming of the lepers, they have all gone away until the sisters are willing to live in and the former people come back to continue farming. Her greatest joy now is to call the rehabilitation center her home, to became the children of God, no more emptiness with the belief in God, and feel with the dependance that there is hope. With the help and care of the priest, sisters and benefactors, today life is a reality."

The elder is so simple and observant that she can feel the love of God through our slightest care and also from the priest and benefactors. How pleased it is ah!