Visiting patients of HIV/AIDS in Hunan "Home Care" by Father Fernando Azpiroz.
During this Easter I had the opportunity to pay three visits to our CRSS Loving Care Center for HIV-AIDS patients in Hongjiang, Hunan Province.
The first visit was during Holy Week was a great privilege and a gift because I could see patients both adults and childrens as well as the sisters who serve them and accompany and volunteers, one can feel the mystery of the Passion and resurrection of the Lord is physically present in their bodies, touching every aspect fo your life, and thanks to them, too touching and transforming my life, the mystery of the Passion of Jesus Christ felt the presence of Christ which is also reflected in them! 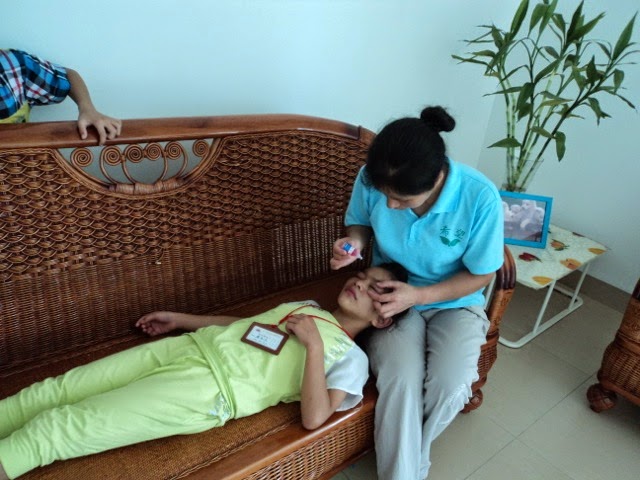 The second visit was to attend the 10th anniversary of one our centers for palliative care for patients infected with HIV or affected in Hunan Province.
The center is home to about twenty patients, including 4 children. It was the first center of its kind in the province and one of the first in China. At the ceremony attended by more than 200 guests, including goings Beijing authorities and the provincial capital, including an actress who is the wife of the president as "ambassador" on issues related to AIDS. With it came more than twenty journalists, so our patients had to mingle with other people to avoid being interviewed. In China, discrimination against people affected and infected by AIDS is very strong. It was interesting to hear people's government expressed his admiration for the dedication and service to the sisters and Casa Ricci provide patients. Listen to a provincial minister of China say publicly "Without faith, this work would be imposible" is something very rare, almost hard to believe. Once again, it is clear that for God nothing is impossible, ask you now Mary.


Finallly, my last visit to Hongjiang took place just one week ago. I had the honor to preside over the Mass to celebrate the final vows of two Chinese Sisters who had served at the center and with other CRSS services as well. With their big smiles and firm voices they pronounced their final vows. I could feel how much their daily service and friendship with the poor and the suffering have brought immense joy and deep meaning to their consecrated lives. These young Chinese Sisters centainly knew what they were doing when they promised chastity, poverty and obedience to serve the Lord, living in those who are suffering.
Just as new flowers blossom during Spring. Easter is also a time for new projects to unfold. During the past two months, two important Casa Ricci projects have gradually been taking shape. One is the future opening of a new HIV-AIDS children's home in Guangxi, a province where there is a big need for this kinds of service to families affected by HIV. The other important project is the developing of a new educational center to offer short term professional trainning to youths coming from underprivileged and marginalized families in southern China. This is a very challenging and difficult project. This center will requiere quite a lot of negotiating with the local government to get their approval and support. But nothing is impossible for the Lord, as Mary taught us! Please, pray for these tow intentions, so we can be open and faithful to the inspirations of the Holy Spirit, so that the Holy Spirit will continue to inspire our faith and perseverance.
With gratitude for you friendship and support!
In Christ,
Fr. Fernando Azpiroz, S. J.