Jeffrey testimony of a friend who visited the lepers

Thank you very much for inviting me to visit the sick on the island. I am a witness of love in action. 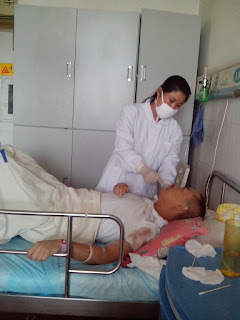 The sick are very happy for all the love and support he has shown them. They are very grateful and praise the Lord constantly by sending it to them. I witnessed something very special during my stay on the island.


There was a young Peking named Jack. It was on the island in recent months to shoot the sick. His intention was to show the film at the International Festival in Cannes, France to show the world his talents to film.

While making the film, I witnessed the loving care of the Sisters for the sick. I had never seen before Catholic Sisters. This was the first. This caused me a deep impression. Love, which the confession, had never seen. Was totally impressed phoned his mother in Peking, her parents are both doctors, and told his mother that for the first time in his life, witnessed the true love in action.

Returned in the Chinese New Year in their free time to visit patients. This time he brought his own clothes to give it to patients. He said that the sick will talk much of Casa Ricci and wants to meet and see in what way can also help in other centers.

He said he would visit other centers for film and document to bring help everywhere.Since he started his first project to raise funds to change metal legs with plastic others. Already received the first support for this project.


I gave him the phone number, and I hope that I will call so that I can make an appointment to introduce.
For now, thanks for giving me the chance to work testimonear her loving and beautiful fruits of their sweat and blood.